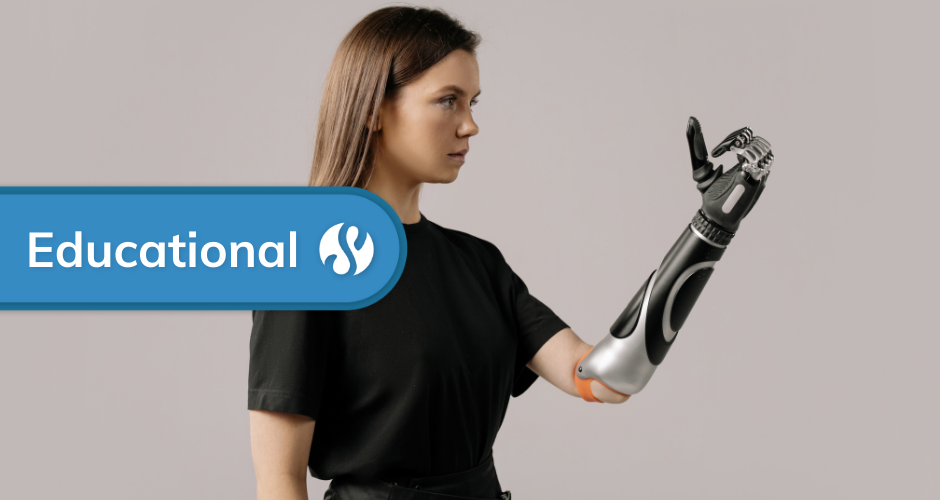 The hand of an individual comprises of 21 degrees of freedom and can be viewed as a means of accomplishing various physical activities, environmental navigation and the carrying out of social interactions. The degree of upper limb loss can be categorised into seven places depending on the severity of amputation as follows: forequarter, shoulder disarticulation, transhumeral elbow disarticulation, transradial wrist disarticulation and trans-carpal amputation. An annotated image of the skeletal view of the upper limb can be seen in Fig. 1. 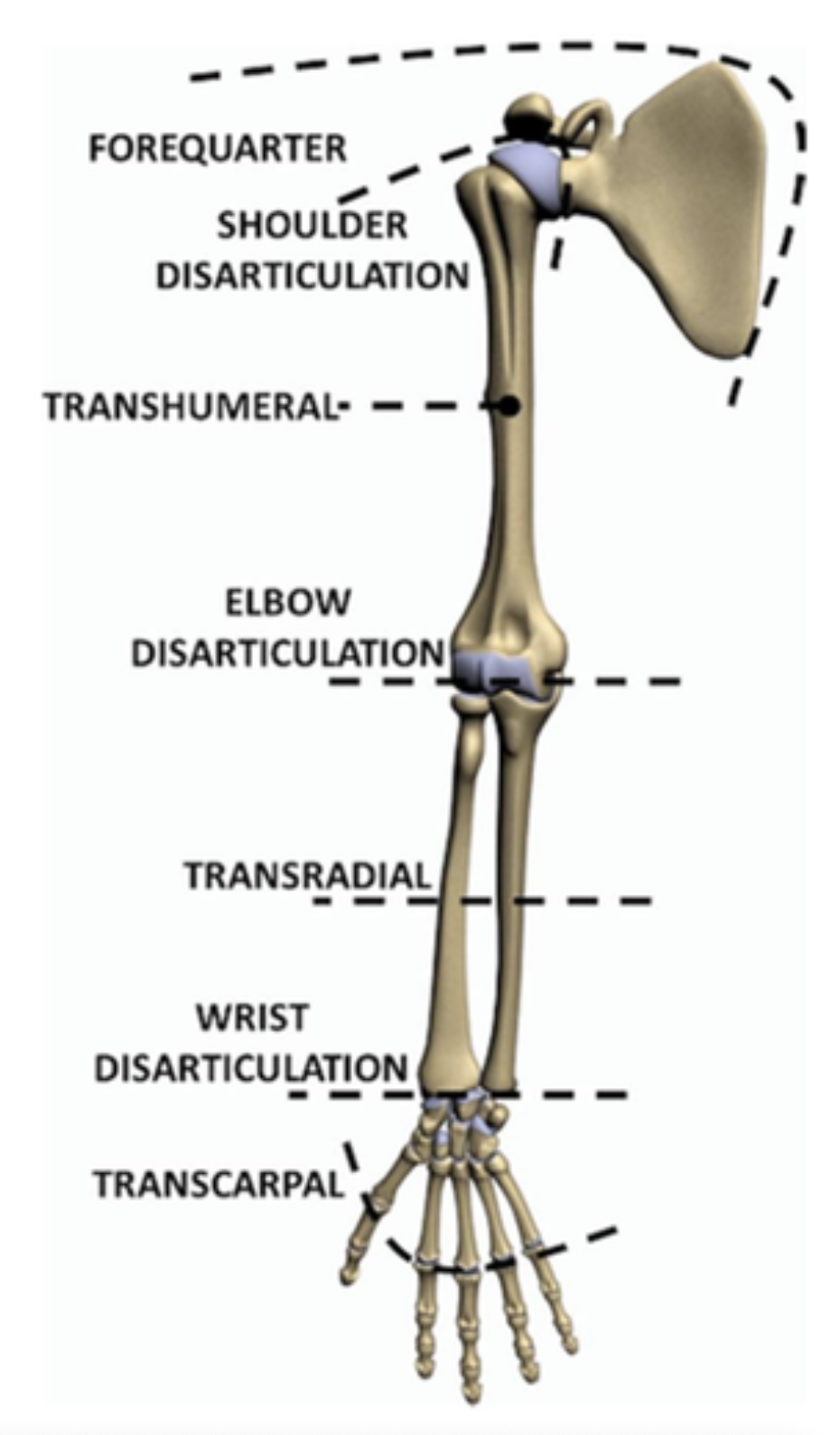 Skeletal view of the upper limb annotated with levels of limb absence.

Combined statistics on the levels of upper-limb amputations in the UK and Italy show that (aside from transcarpal amputees) transhumeral amputees account for the largest cohort amongst upper limb amputees at 16%, closely followed by transradial amputees at 12%, a pie chart of this can be seen in Fig. 2. 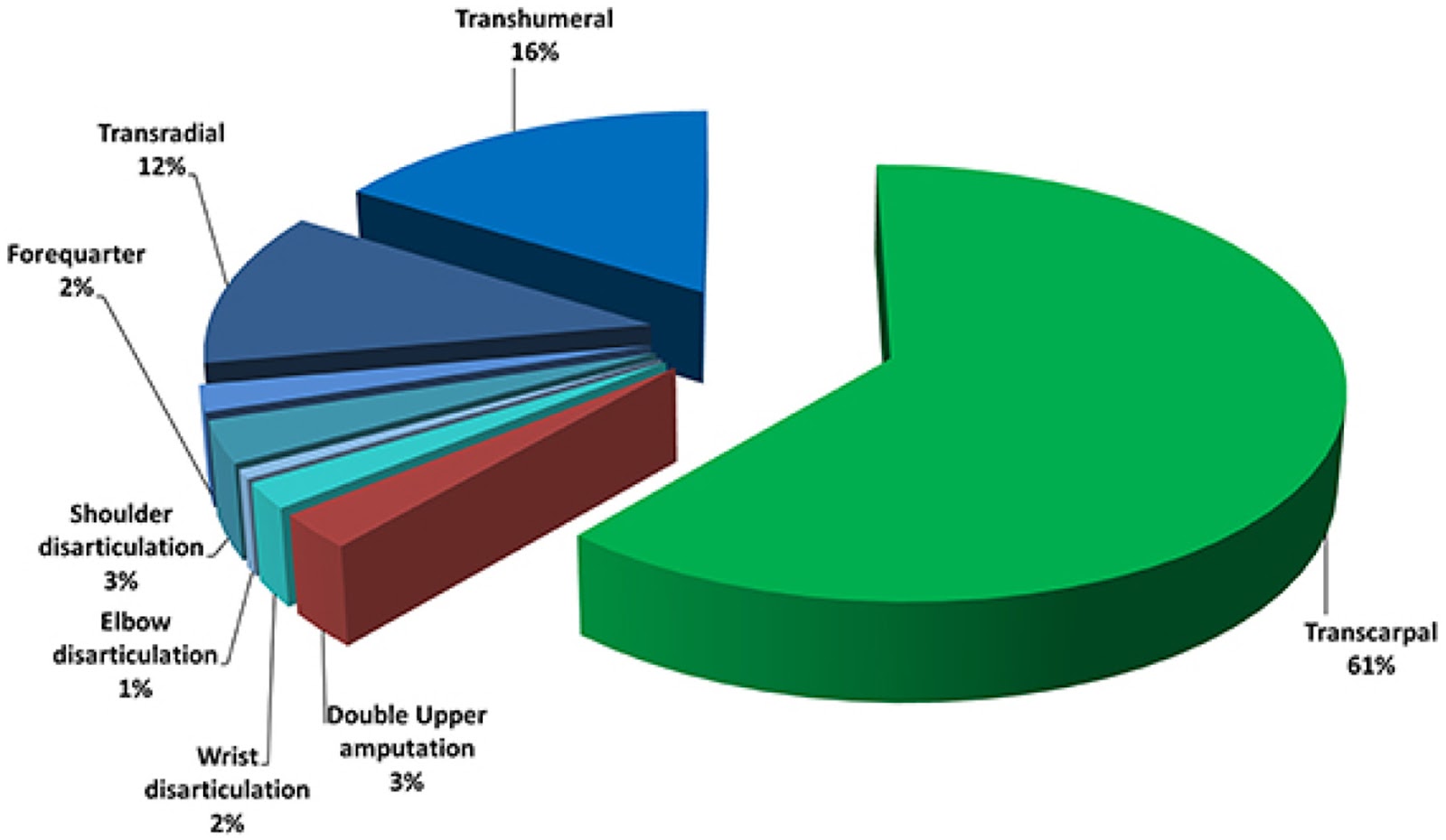 The brain is said to be in feedback with various nerves which conduct signals back and forth through the efferent and afferent pathways, which cater to motor control and feedback sensations. Limb loss through amputation distorts the closed-loop nature of the feedback system. The National Amputee Statistical Database (NASDAB) cites trauma as the main cause of upper limb amputations, closely followed by neoplasia and vascular infections.

So what kind of prosthesis are there? There are three main kinds of prostheses:

1. The non-functional and mainly cosmetic prosthesis 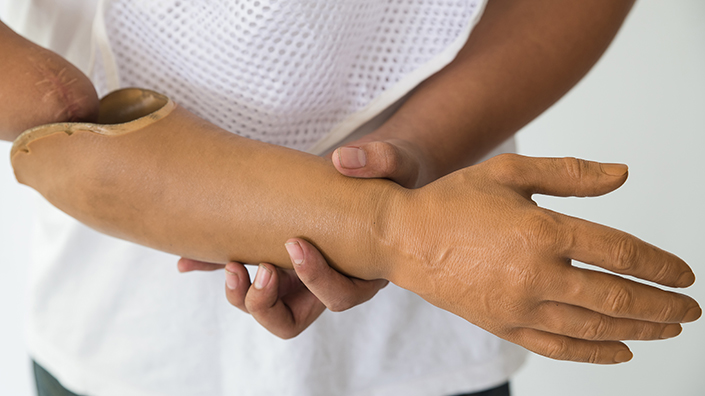 3. The myoelectric prosthesis – using signals from remaining muscles to control a prosthesis

Although there have been significant advances in this area over the last few decades, technical and ergonomic challenges exist which myoelectric prosthesis users are affected by. Technical challenges include the embedding of the relevant electronics, motors and actuators into the prosthetic limb while maintaining an acceptable weight, control system and the need for the occasional surgically implanted electrode into the anatomy or brain. Ergonomic challenges include invasiveness of neuromuscular electrodes, the cognitive load associated with operability and overall durability.

A wide number of biopotential acquisition methods have been researched for the application of control of upper limb prosthesis.

Scientific research on the adoption of EMG signal as an input for prosthesis control dates to 1948, and has been applied across numerous case studies both clinically and academically, as an acquired EMG signal reflects motoneuronal generated signals from the brain and culminates in an electrical action potential, which in turn can be recorded with surface electrodes. Despite the wide and favoured application of surface acquired EMG signals, common limitations include signal degradation due to muscular fatigue and proneness to crosstalk from neighbouring muscles. To compensate for the limitations of EMG, NIR has been proposed by several authors as this allows for concurrent monitoring of the perfusion level and oxygenation of the muscles, which produces a signal with a high spatial resolution. NIR in the region of 650–1000 nm is used for human monitoring as this allows for non-invasive tissue monitoring, with the human tissue being transparent to light in this region, and main light absorbers being oxygenated and deoxygenated variations of haemoglobin.

The setup for NIR sensing requires a light emitting diode (LED) infrared emitter and an associated receiver, working with the principle of light scattering through biological tissue which can be picked up by an appropriate photodetector. The penetrative depth of the travelling NIR light is governed by halving the distance between the infrared transmitter and receiver. Oxygenated and deoxygenated haemoglobin present in the blood possess complementary optical properties to NIR light which allows the contraction of a muscle to cause a variation in the amount of infrared light being acquired by the NIR receiver on the surface of the skin. Thus, it is hypothesised that the fusion of physiological estimates consisting of both EMG and NIR signals would allow for an enhanced monitor of muscle state and contractions from both an electrophysiological and hemodynamic perspective, and thereby provide a rich signal source to serve as the input for the actuation of a prosthetic limb.

In this study, we investigate the design of a myoelectric control system for transhumeral amputees, who represent the largest cohort who have had significant limb amputation, with EMG and NIR sensing.

This study will aim to take both ergonomic and technical issues into consideration and in particular, will be addressing the following:

1. Design and selection of non-invasive and wearable sensors that are affordable, comfortable and can be incorporated into a prosthesis.

2. Comparison of classification and gesture recognition accuracy of EMG-NIR, EMG only and NIR only.

3. Use of ultrasound as an independent contrastive base to study the anatomy around the humerus.

This blog was adapted from part of a larger scientific study which the author contributed to. You can find that for reference here.

Do you want to be smart enough to write a research paper like this?

Ejay has the expertise to help you on your way to performing world-changing research like this in the world of STEM.

Contact him today using the author link below, or use our search wizard to find the perfect tutor for you. 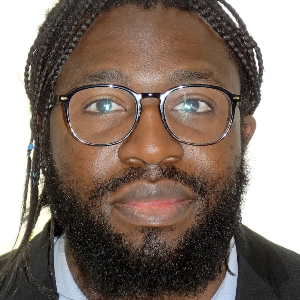 5 Tips to Become a Lifelong Learner

Reading is one of the best known ways for individuals to increase their knowledge. However, research reveals children today are reading less than ever.

Read Around the Topic - GCSE Physics. Does the Big Bang Provide Enough Evidence for the Origins of the Universe?

How was our universe created? The secular perspective includes matter and subatomic particles coming together to expand and explode creating the universe. Others argue the non-secular theory

Autism is a condition which means a person’s brain works differently to other people’s and affects the way they experience the world around them.