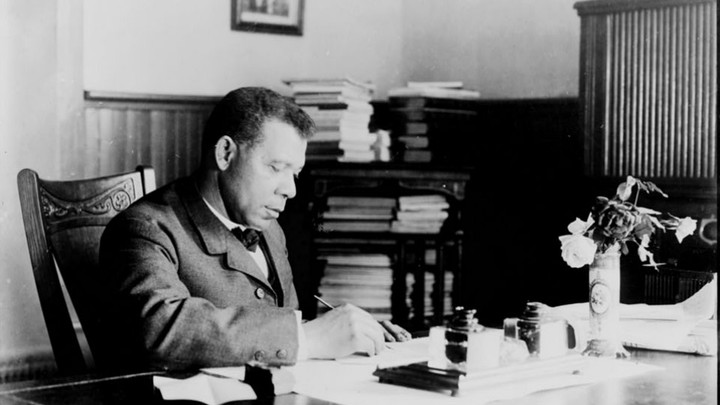 Unlike today, Booker Taliaferro Washington lived in a time when there actually was a credible black conservative tradition. Washington was an American educator, author, and adviser to multiple presidents of the United States. Washington was in fact from the last generation of black American leaders born into slavery yet became the leading voice of the former slaves as well as their descendants. Determined to get an education, Washington enrolled at the Hampton Normal and Agricultural Institute, whilst he taught children in a day school and adults at night.

Most black people felt comfortable with Washington’s approach, however, his influence among whites was so strong, that he became an unofficial arbiter determining which Black individuals and institutions were deemed worthy to benefit from government patronage and white philanthropic support!

He urged his fellow blacks, most of whom were impoverished and illiterate farm labourers, to temporarily abandon their efforts to win full civil rights and political power and instead to cultivate their industrial and farming skills to attain economic security. Hence, they would accept segregation and discrimination, at the time. Their beliefs included that, eventual acquisition of wealth and culture would gradually win them the respect they deserve and acceptance of the white community.

This would break down the divisions between the two races and lead to equal citizenship for Blacks in the end. In his epochal speech (September 18, 1895) to a racially mixed audience at the Atlanta Exposition, Washington summed up his pragmatic approach in the famous phrase:

In all things that are purely social we can be separate as the fingers, yet one as the hand in all things essential to mutual progress.

To rediscover your interest in American History, you can find a History tutor here!

10 tips for tutors and teachers to stay motivated in the classroom.

We have outlined 10 tips for teachers and tutors to keep motivation levels high.

The knighted BBC broadcaster has been the tranquil voice of nature documentary narration since the beginning of, well, nature documentaries! Attenborough set off to explore the globe in his t